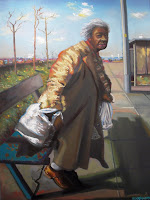 Living in I sometimes miss the public transit system of my home town () and the exposure to random strangers it facilitated.

Once, I was on a city bus when an elderly woman embarked from a stop outside a shopping center. She was carrying several bags in the manner of one who is accustomed to such a haul. She sat on one of the front benches, at a diagonal to where I was seated.

I have a mind that is quick to formulate theories about the lives of others, by piecing together fragments of given information, like the way their faces have worn or by their body language or in their expressions of dress. With this woman, I guessed she probably lived alone. Namely, I noticed her shoes were old. And I don't mean several years old... I mean, several decades old. I recognized their vintage to be from the sixties or seventies. They were not stylish and they were worn. She did not appear poor enough to be rendered ineligible for an upgrade. Even a second hand pair would surely be an improvement. Perhaps, to her, they were good enough back then, so why wouldn't they be good enough now? But it seemed to me that if she had someone in her life who was intimate enough to concern themselves with such details, she wouldn't be wearing such by-gone footwear.

The thought of being old and alone is a pretty terrifying thought to most humans. So the natural inclination would be to pull back from identifying with any representation of such a dreaded fate. But instead, for some reason, I felt inclined to peer closer…to lift the veil of 'otherness' and to merge momentarily with her humanity.

Suddenly I experienced there to be no distance between us. I felt I was her and I was quite at home with myself. It was no more scary than being the me that observed her as ‘other’. I felt the space between the particles of air was filled with some connective fluid whose substance was compassion. It was so beautiful! Then the feeling spread and I felt the same compassion and union with every person on the bus. I remember having the thought; 'This must be how Jesus felt.' I was flooded with love and realized we were all held and witnessed by this cosmic sinew of compassion.

It was interesting that I found the door to this state by an intentional rapprochement toward that which seemed a dreaded fate. And by looking beyond fear, I received a memorable gift of spiritual comfort.

For weeks after this experience, I kept trying to re-enter that state. I felt desperate to live there. But I have had to reconcile myself to the elusiveness of its entry point. I'm grateful for the taste I was given and I will keep trying to lift the veil. I will post directions when I find the portal again. 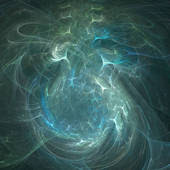 The space between us;

Can we dive in

To reach, to touch?

The space between words;

Is that where the truth resides?

I am peering between the molecules of air.

I am parting the curtain of your flesh.

I am deciphering the fourth dimension of you

For therein lies the face of God.

Posted by smilingskyward at 3:27 PM

smilingskyward
I am an Ordained Interfaith Minister through the Chaplaincy Institute in Berkeley since 2009. My Ministry consists of helping others to get in touch with their own connection to source and internal compass. I have facilitated a multitude of gatherings from Movement Meditations to Dream Interpretation and Spiritual Discussion Groups to Guided Meditations. I am currently the Meditation Facilitator for Welfiit Malibu Resort and Visions Adolescent Treatment Centers. My guided meditations have been broadcast on public radio where I co-hosted a show called "Conscious Living Radio" until I moved back to L.A. Previously, I spent ten years in the healing arts as a Massage Therapist... a profound education on the soul-beauty of everyone. This blog began as a place for my little poems, but, like me, it has evolved into a fuller expression of who I came here to be. I am available for facilitating guided meditations for retreats or private groups.

Send me a message :)

My first book 'Life Is But A Dream' explores dream interpretation as practice for life interpretation... all things being metaphors to the soul and symbolism being the language of spirit. It can be ordered through Amazon by clicking here.

My recent work is a collection of Mystic poetry titled 'At Play In The Cosmos Of All' available here.